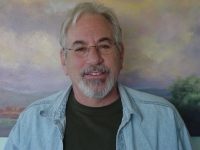 Albert Scharf was born in New York City in 1951, and has received a BFA in architecture and photography from the University of New Mexico.

Scharf had a career in graphic design and commercial printing, and the artist has continued his artistic education at the New School, the Printing School of New York, and Santa Fe Community College.

Scharf’s father was an aristocrat who fled the growing Nazi regime in Vienna, eventually finding Scharf’s Brooklyn-born mother and settling in Long Island. A young Scharf absorbed the art of New York City, and the artist still vividly recalls the pomp and decorum once involved in museum visits.

Such reverence for art certainly played a part in what led him to his studio in Santa Fe today.